This season, the WHL will switch to a more division-based playoff format, similar to the one used by the NHL. We’ll take a closer look at how this playoff format works and what it means for potential matchups for the Thunderbirds.

Previous to this new format, the WHL used a conference format. The top-8 teams in each conference would make the playoffs, regardless of division. The top team in each division would be seeded #1 or #2, depending on points, and then #3-#8 would be placed in order of points. Home ice would go to the highest ranked team in the first round but in the second and subsequent rounds, home ice would belong to the team with the highest point total. Teams were re-seeded after each round, meaning that the remaining team with the highest point total would always play the remaining team with the lowest point total, regardless of seeding.

New this year, though, is the divisional format. The top-8 teams, for all intents and purposes, still make the playoffs but are seeded and matched up differently. (There is an extreme and very unlikely way for a team that is top-8 in points to not make the playoffs, and only possible in the Eastern Conference, but the odds of this occurring are almost zero.) The top-3 in each division are guaranteed to make the playoffs. The final two spots are called wild cards and are filled with the 2 teams outside of the top-3 of either division with the highest point totals, regardless of division.

Let’s take a look at the standings from the end of last season as an example: 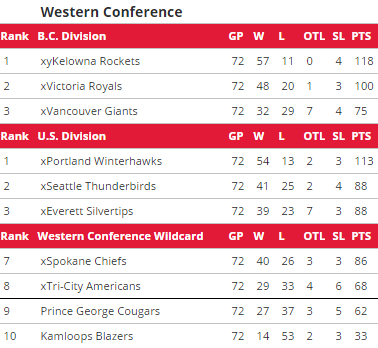 In the B.C. Division, Victoria and Vancouver would play each other while in the U.S. Division, Seattle and Everett would play each other (which is what actually happened in the old format). Kelowna, as the #1 seed in the conference, would get the wild card team with the lowest point total, which in this example is Tri-City. Portland as a division winner would get the other wild card team, Spokane.

Moving on to the next round, the teams stay inside their division, even if they are a wild card playing in the opposite division. For our example, let’s assume that the teams with the higher point totals won each series. This would mean that in the B.C. Division Kelowna and Victoria would play while Portland and Seattle would play in the U.S. Division.

Assuming the higher point totals win again, that would set up a Kelowna-Portland Western Conference final.

What the WHL is trying to accomplish with this format is more divisional matchups in the playoffs. It cuts down on travel (for the most part) and also makes the division games played during the regular season theoretically mean more.

Hopefully that explained the new format. Now, as to what that means for this season. Here are what the standings currently look like: 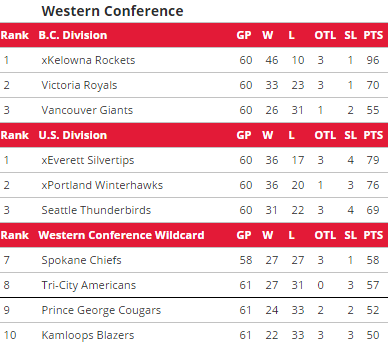 Seattle is currently 3rd in the U.S. Division which would mean a matchup with the #2 team in the division. Right now that would be Portland. However, given how tight the top of the division is getting, that could change before the end of the season. If Seattle gets into the top 2 slots of the division, that would mean home ice in the first round.

Given their position, anything that happens in the B.C. Division doesn’t really affect the Thunderbirds. Ideally, Seattle would like to finish above Victoria, points-wise, just in case they happen to meet in the Western Conference final. In that instance, Seattle would have home ice. That’s looking pretty far ahead though and a lot would have to happen for that matchup to come to fruition and those point totals to matter.

There’s still a lot of movement that can happen in the last 12 games of the season but, with the new WHL playoff format, it’s pretty much a guarantee that you are going to see an I-5 rival in the first round of the playoffs this season.