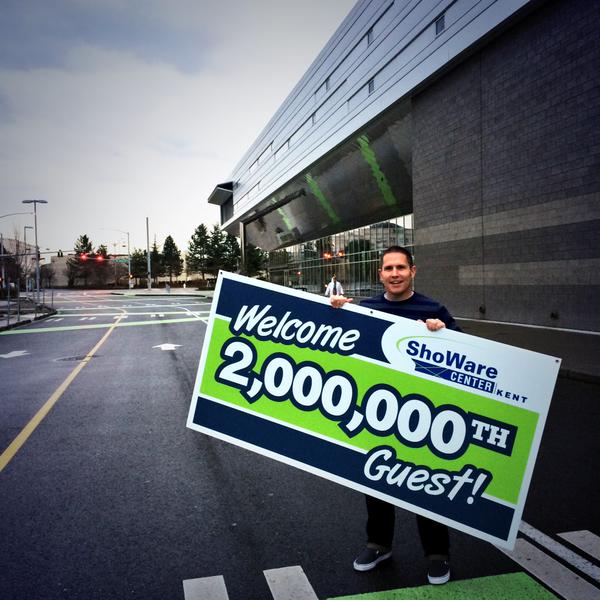 Last Friday night, one attendee of the Spokane Chiefs vs Seattle Thunderbirds game was going to be the 2 millionth person to enjoy an event at ShoWare Center in Kent. That attendee was Kent-West Hill resident Erik Hannon. We had an opportunity this weekend to talk to that honored guest and find out a little more about him, his appreciation for the Thunderbirds and for hockey, and what it felt like to be the VIP for the evening.

First, though, a little history about the ShoWare Center. It opened in January 2009 and the first event was an Everett Silvertips vs Seattle Thunderbirds game in front of a sold out crowd. Hosting various other sporting events, concerts and ice shows, ShoWare Center reached 1 million guests in mid-November 2011. Of the almost 2 million guests the arena had had prior to Friday night, Thunderbirds attendance accounted for just over 925,000 or about 46%. So it was only fitting that for this honor, a hockey fan and TBirds season ticket holder would be the winner.

Hockey being relatively new to Kent, you hear a lot of different stories on how people in the area have become hockey fans in general and Thunderbirds fans specifically. A common theme with a lot of these stories about how people get into hockey is being able to see a game live when they are young and also receiving a tangible souvenir that becomes a cherished part of their childhood.

TBird Tidbits: Erik, thank you for taking the time to talk with us. Can you share with us and the readers your first hockey experience?

Erik Hannon: My Great-Grandpa took me to my first hockey game when I was around 9 years old – a game between the San Jose Sharks and the Minnesota North Stars at Arco Arena in Sacramento. I remember it clearly, as it was of course awesome, but I was lucky enough to catch a practice puck during the warmups. Being so young that was the best thing ever, and I still have that puck.

TT: Are the Sharks your favorite NHL team?

EH: Being from Northern California I will always have a soft spot for the San Jose Sharks, but for a long time I’ve been a Vancouver Canuck fan.

TT: That seems like it would present a bit of a conflict, considering the history between those two teams. Who do you root for when they are head-to-head?

EH: When they play each other, I’ll use many deciding factors on who to root for including current record or standings, location, etc.

TT: That’s a pretty rational way of deciding. Moving on to being a Thunderbirds fan, I’m guessing they are your only team in the WHL, so no conflicts there. How long have you been a TBirds supporter?

EH: I’ve been a fan basically since they moved to ShoWare Center. I hadn’t really heard of them before then. [Erik moved up here 8 years ago.]

TT: Was there something specific that got you to your first TBirds game or was it just fulfilling the interest that had started in Sacramento?

EH: My girlfriend Erica is an avid knitter, and the yarn shop that used to be in Kent Station was having a group go to a game, so I suggested that we should go even though she was not a hockey fan. All it took was that first game and she was hooked. The next season we bought season tickets and have been buying them ever since.

TT: In the past few years of being a fan and season ticket holder, is there a TBird player that stands out as a favorite of yours?

EH: Brenden Dillon. This guy is amazing. It was fun watching him grow with the TBirds, and to see all his hard work pay off for him. He’s humble, nice and down-to-earth, and still comes back to visit the TBirds in the off season sometimes. Even now that he’s a starting defenseman in the NHL, he still has time for his fans. What a guy.

[Dillon was traded to the San Jose Sharks last week which we’re sure was well received at Erik’s house.]

TT: Let’s talk a bit about the prize package you won for being the 2 millionth guest. It’s quite a list of prizes:

EH: I’m also getting the big “2,000,000th” guest sign that was hanging at ShoWare. They said I could have it and I thought it’d be cool in my garage. [That sign is shown in the picture above.]

TT: Of that list, is there one you are most excited about?

EH: The tickets for all the events at ShoWare! I’ve never been to anything but hockey, so it’ll be great to see the facility set up in a different way. Also, there are shows that are coming that I always thought “That sounds good to see if I won tickets!”, and now I’ll finally get to see those shows.

TT: Which of those shows are you looking forward to?

EH: The first one that came to mind is the Wolf Hometown Holiday. I’ve never, ever been to a country show, and this seems like a good one. I’m also looking forward to 1964: The Tribute and Erica is looking forward to Stayin’ Alive – Bee Gees Tribute.

TT: Let’s go back to Friday night. Can you tell us about the experience of finding out you were the 2 millionth fan and what happened after that?

EH: At first I had no idea what was going on. I had a busy night before getting to the arena so I forgot about the 2 millionth guest thing. We got to the arena later than we usually do, went through security like normal, then went to the farthest door west to go in. There was a girl there who was kind of making me wait after my ticket was scanned – I was confused as to what was going on, then it hit me when I saw the big sign. I asked her, “Am I 2 million?” and she just smiled at me and said go ahead – then the confetti and stuff started flying. Next thing I knew the Mayor (of Kent, Suzette Cooke) was there congratulating me and asking me questions and pointing me towards cameras, etc. It was fun! She was so very nice, and directed me over to meet other City of Kent council members. I had a quick interview with the Kent Reporter and then went over to my seat where all my friends congratulated me. All the ShoWare staff who saw me ALL said congratulations when I went by.

TT: Finally, as mentioned above, you got to participate in the ceremonial puck drop before the game. What was that like to be on the ice in the middle of the arena?

EH: This was great! (Seattle Thunderbirds captain) Justin Hickman is tall already, but when you’re standing next to him when he has skates on, he’s giant. Probably at least two feet taller than me. It was obvious that he and (Spokane Chiefs captain Jason) Fram had done that many times before. I wasn’t nervous at all until I looked up and all the TBirds, Chiefs and staff were looking at me. That made me pause for a second, but then it was fine. It seemed very quick.

We hope you appreciated this account of the experience of the 2 millionth guest. Sometime this season, the Seattle Thunderbirds will welcome their 1 millionth fan since they have moved to Kent and we’ll have to see if they do anything to recognize that. Apart from that though, we should expect a celebration of the 3 millionth ShoWare Center guest sometime in 2017. And we will be there when that happens.