Today we are going to look at a pretty common stat, assists, but look at them in a different way. We are going to break them down by team strength and also primary and secondary.

First, we’ll take a look at what an assist is. Yes, very basic but will help us get an understanding on what the difference between a primary and secondary assist is.

An assist is awarded to the player or players (maximum two) who touches the puck prior to the goal scorer, provided no defender plays or possesses the puck in between.
Assists can be given to deserving players on a goal that has been awarded by the Referee, if the Official Scorer deems that assists would have been given on the eventual goal anyway.

Having gone over that, let’s take a look at how these numbers break down for the Thunderbirds so far this season: 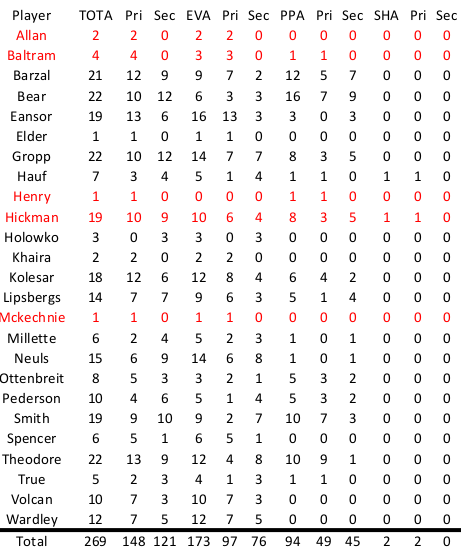 Assists by situation and primary/secondary as of 2/18.
The players in red indicate those no longer with the team.

Just looking at the basics, Seattle has scored 162 goals this season according to the WHL website. What we do is subtract the goals awarded for shootout wins (6) which brings the total to 156. So on those 156 goals, 269 total assists have been awarded, 148 primary and 121 secondary. (There have been 8 unassisted goals which is why primary number doesn’t equal the goal total.)

D Shea Theodore, F Ryan Gropp and D Ethan Bear are all tied for the team lead in total assists (TOTA) with 22. How they each get to that total is quite different, however. Theodore is pretty balanced between his even-strength assists (EVA) and power play assists (PPA). Gropp is almost 2-to-1 in even-strength vs power play. The big one though is Bear getting almost all of his assists on the power play. While Theodore has the most primary assists on the power play, it’s clear that with 16 assists, a power play goal is going to hit Bear’s stick at some point. Put another way, of the 49 power play goals scored so far for Seattle, Bear has assisted on 32.7% of them, basically 1/3.

Focusing on Bear for a second, his 16 assists on the power play are good for 11th in the WHL. He ranks 7th among WHL defenseman for power play assists and is 3rd in the league among 1997-born defenseman. Very strong numbers for a player in his draft year and something to look forward to for next season, especially with Theodore (possibly) gone.

Given all the time that each of them missed, the fact that F Mathew Barzal and Theodore are among the team leaders show how much of an offensive impact they have. That will be key as this season winds down and Seattle makes that push towards Portland and trying to get home ice advantage in the first round of the playoffs.