One of the stats we track with a lot of detail is penalties. This post will break those down a little bit and provide some more detail than just player and minutes and look at penalty totals and percentages.

First, we’ll take a look at the overall numbers. This chart shows how many penalties each player has taken. This number is every penalty (minors, majors, misconducts) and any double-minor is counted as 2 penalties.

For the season, Seattle had 427 total penalties. I don’t think anyone is shocked that Evan Wardley leads the list. Jared Hauf being 2nd, however, is a little surprising. All the bench minors were for too many men on the ice.

# of power plays and % of total penalties

Seattle was short-handed 274 times for the season. That was 64.17% of the 427 total penalties that resulted in a power play. (The WHL site has it at 275 but there is an uncorrected error on a scoresheet that erroneously gave a power play to each team.)

What the chart shows is that when Shea Theodore takes a penalty, he’s not taking anyone else with him. So that means no matching roughing penalties or fighting majors. Contrast that with someone like Luke Osterman who only has 27.27% of his penalties resulting in an opposition power play. If Osterman is headed to the box, he’s not going to be lonely.

What also jumps out is that, even though Evan Wardley had the most penalties and most penalties resulting in opposition power plays, he’s not even top-10 percentage wise in penalties that lead to power plays for the opponents. So, he takes a lot of penalties but, as a percentage, he’s not leaving his team as shorthanded as some other players. 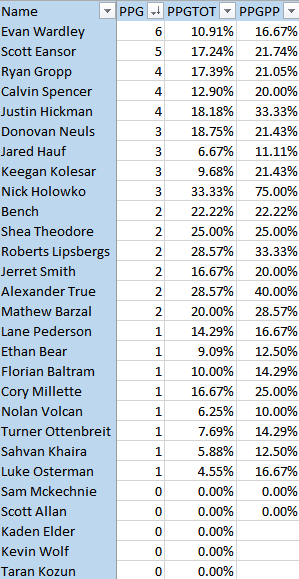 If you are looking at raw numbers, again Evan Wardley is the leader. That is to be expected based on how many penalties he had. But then look at the percentages. Nick Holowko took only 9 penalties all season, 4 of which resulted in a power play. But 3 of those 4 lead to power play goals, a 75% conversion rate. He’s one of 6 players (including the bench) where 20%+ of their total penalties resulted in a goal and one of 15 players where 20%+ of their penalties that lead to a power play were scored on.

On the flip side, Nolan Volcan and Jared Hauf are the two top players in terms of their penalties not causing a goal against. Only 6.25% of Volcan’s 16 total penalties resulted in a goal. Jared Hauf, who we saw above was #2 for total penalties, only has 3 of his 45 total penalties scored on, a 6.67% result.

One final list now. It’s the most common penalty called for each player. We’ll list these in alphabetical order by last name and number of instances called