Hope everyone has been enjoying their summer so far. I know this heatwave we’ve been under the last couple months has had me looking forward to getting back to the rink and watching some hockey.

With a little downtime and not much to do, I thought we would take a quick look at the Thunderbirds schedule for the upcoming season and see what jumps out.

First, a look at the schedule for both the preseason and regular season:

(If this sounds familiar, these are the same teams and times, in order, that the TBirds played last year in the Everett Tournament.) 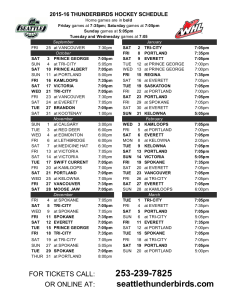 Some interesting notes about this year’s schedule:

25% of all home games, 9 out of 36, are on a Tuesday night. That’s pretty incredible considering it wasn’t that long ago that playing on Tuesday night was unheard of. (Also, 9? That’s going to be a pretty interesting magnet collage.) This season’s Tuesday opponents in order: Brandon, Swift Current, Prince George, Spokane, Saskatoon, Kelowna, Vancouver, Tri-City, Spokane.

A couple odd start times for some away games. On Halloween, the TBirds will be in Cranbrook and that game starts at 1pm Seattle time. Also, a game in Kelowna on 2/8 (Family Day in BC) will start at 2pm Seattle time.

Some other stats and how they compare to the last 2 seasons: