Just over a month after the Thunderbirds appearance at the MasterCard Memorial Cup, we are looking forward to the 2017-18 season as the schedule was released earlier today. Seattle will begin their defense of the WHL Championship at home on September 23rd vs Tri-City. Before we get to the full schedule, though, let’s take a look at the preseason.

The annual Labor Day weekend tournament in Everett gets a new name this season. Here is the schedule for the TBirds at this year’s Delta Hotels Preseason Classic:

This marks the 2nd straight year that the Tips and TBirds have met in this preseason tournament. Not since the inaugural tournament in Everett in 2004 have the Giants and Thunderbirds met in the preseason.

The TBirds then head to Kennewick for the Americans annual Red Lion Hotels Preseason Tournament:

Seattle finishes the preseason with a home-and-home set with Everett on Friday, September 15th in Snohomish County and then home at ShoWare on September 16th.

Here is the regular season schedule for the 2017-18 season: 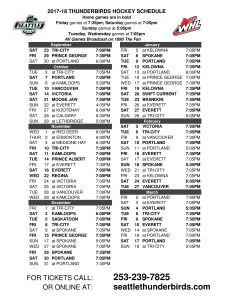 Right off the top, Seattle opens at home against the Tri-City Americans on September 23rd. A couple of noteworthy items here. This will be the first time that a WHL Championship banner will get raised by a Thunderbirds team. It also marks the first time since the 1999-2000 season that the TBirds play game #1 at home. Finally, it is the first time ever that Seattle has played a season opener vs Tri-City.

October 7th brings the Portland Winterhawks to town for the first time. They will come to Kent 6 times this season with Seattle making the same number of trips south. This will be the earliest in a season that the TBirds have hosted the Winterhawks since opening night of the 1999-2000 season mentioned above. That game was on September 25th, 1999. (As a side note, we will be celebrating Mrs. Tidbits birthday at the October 7th game so if you see her, wish her a happy birthday!)

Sunday, October 22nd marks the first meeting of the season, 10 in total, between Seattle and Everett. This will be just the 2nd regular season game, and 3rd ever, between these two teams to take place on a Sunday in Everett. Game time is 4:05 pm so you’ll still be home in time for dinner.

The game at Everett on October 22nd also starts the longest streak of games away from the ShoWare Center. (Difficult to call it a road trip as the team will likely sleep in their own beds all week.) After that game, Seattle heads out on their biannual Central Division trip with games at the new look Kootenay Ice (10/27), Calgary Hitmen (10/28), Lethbridge Hurricanes (10/29), Red Deer Rebels (11/1), Edmonton Oil Kings (11/2), and Medicine Hat Tigers (11/4). All together it is 7 games and 19 days away from the ShoWare Center.

The traditional pre-American Thanksgiving home game returns this season after a 5-year absence and it returns with a bang. The Regina Pats make their one and only appearance in Kent this season on November 22nd in a rematch of the 2017 WHL Final. Seattle had played at home on the Wednesday before Thanksgiving in 1997-99, 2001-07, and 2009-12. This will be the 4th time that the Pats and TBirds have faced off in Seattle/Kent on the night before U.S. Thanksgiving.

Following the holiday, the fan favorite trip to Victoria occurs with games in the British Columbia capital on November 24th and 25th. With the long weekend for fans in the States, expect there to be a lot of Thunderbirds fans at the Save-On Foods Memorial Centre for those games.

From December 9th through 29th, 4 out of the 5 games Seattle has will be against Spokane. The final of those 4 on December 29th at ShoWare starts a 3-in-3 weekend to end the 2017 calendar year. Saturday, December 30th, Seattle hosts Portland before heading to the Rose City for the traditional New Year’s Eve game.

February 24th will be the annual Hockey Challenge game. The TBirds play at 605pm vs Everett with the celebrity game following right after. The whole day will be filled with games at ShoWare as Seattle continues its tradition of raising money for the Ronald McDonald House.

For the first time since the 2010-11 season, the TBirds do not have a Monday game scheduled.

The entire month of March, 10 games, is against US Division opponents. No matter where Seattle is in the standings, that month will have a big effect on playoff position and qualification.

One of those games, March 4th vs Portland will be the first time since the 1995-96 season that the Winterhawks play in Seattle/Kent on a Sunday. This used to not be a rarity but has not happened since the first season played at KeyArena.

The ShoWare Center will host a game on St Patrick’s Day for the 3rd time since opening, this season vs Portland. Is this finally the season we see the return of the green jerseys, especially against the red sweaters of the Winterhawks?

Some other stats and how they compare to the last 4 seasons:

Quick analysis here. While that seems like a lot of 3-in-3 weekends, they all have minimal travel. The furthest away game where there is a home game the next night is Vancouver which is a lot better than say Kamloops or Kelowna. All the rest involve travel to/from US Division opponents, a couple of which are Everett which barely qualify as road trips.

Seattle sees the number of home Saturday games increase from last season. It comes at the expense of Sunday games but people don’t attend those as much anyway. The number of away Sunday games, however, skyrocketed. Altogether, a pretty good schedule for the Thunderbirds this season as they take the ice as defending WHL Champions for the first time in franchise history.