There aren’t a lot of times that we are going to use this outlet to express opinions. We like trading in facts and figures. However, just like most of you readers, we are fans of the team and certainly have opinions on how things could be different and, therefore, better. Today we are going to look at things we would change about ShoWare Center and the operations/promotions of the team. This isn’t going to be a discussion of coaching staffs, management, player personnel, etc. These will all be things auxiliary to the actual game. Some of these ideas won’t be practical given current contracts and obligations but this is a “perfect world” type post.

First, the concessions have improved since the opening of the building. The Chef’s Corner has been an amazing option. When first introduced, most people ignored it thinking that what was served wasn’t “arena food” but people have came around and it seems to be popular. The key appears to be variety. And while the carving station options don’t vary, it is also a nice choice apart from the fried foods. However, there are areas where things could be improved:

There’s not much reason to go over the actual building as that ship has sailed. It would be nice to have a concourse all the way around the rink but a cost decision was made so it is what it is. Inside the building, though, there are a couple things that can make the experience more enjoyable. 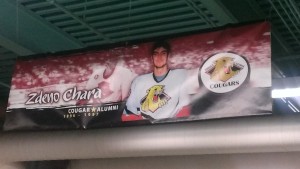 The merchandise options have come a long way since the days of the temporary stands at KeyArena. Having a physical store has helped that out a lot. And yet, they have strayed a little bit from one of their biggest money-makers from back then.

That’s most of what we would want. There are other smaller things here and there we would change but these are the big ones. And honestly, you don’t need a million dollars to do most of these. A lot of these could be implemented without a lot of money or effort.

Now it’s your turn. What you would like to see different at ShoWare Center or with the team? Again, we’re not talking about personnel decisions or styles of play, keep it to the areas we’ve covered here. We’re curious to see if there are suggestions we haven’t thought of that are great ideas.