The WHL released the 2014-15 schedule today. We already knew what the first two Seattle games would be, based on the home opener schedule released last week. The TBirds will open the season in Portland on Sept 19 and will start their home schedule the next night vs the team they eliminated in the playoffs, the Everett Silvertips. So let’s take a look at the other 70 games the Thunderbirds will be playing this year.

Before we get into the regular season, however, a quick glance at the preseason schedule. As Thom Beuning openly pondered on Twitter, it has been a while since the TBirds and Winterhawks haven’t played in the preseason. In fact, we couldn’t find a preseason in the last 12 years where that occurred (and would imagine that in a pre-Tips WHL, Seattle and Portland would have played every preseason). It’s understandable as you want to keep your travel to a minimum for games that don’t matter. Playing a home and home with Everett to end the preseason is the best for everyone involved. Having said that, playing them 3 in a row after playing Spokane 2 in a row is a little silly.

Now on to the regular season. Here is the schedule: 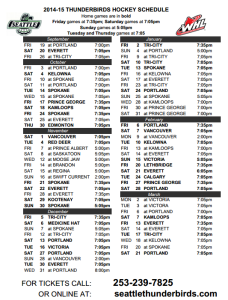 First thing that immediately jumps out is the return of the popular New Years Eve game in Portland. Did the WHL using a computer-written schedule last season change that game and then was fixed this year? Or was it because Seattle saw an opportunity with NYE being on a Tuesday?

The Eastern swing this year is all in one trip which is much better than last season when the Central trip was split up into 2. Also, getting it out of the way in November is preferred to waiting until January like the most recent trip. A little better weather, some team building earlier in the season, and the trade deadline isn’t hanging over the roster while out on the road.

The 8 2-for Tuesdays return and we don’t imagine they are going anywhere soon. Here are the opponents in order: Spokane, Red Deer, Victoria, Everett, Spokane, Kelowna, Calgary, Tri-City. Spokane has been a staple on Tuesdays with at least one home Tuesday game each year being played against them. It’s hard to tell how much influence each team has on their schedule but Kelowna on a Tuesday is interesting. With playoff meetings the past 2 seasons, this is becoming a fairly decent inter-division rivalry. That will make for a hostile building in February.

Portland doesn’t make their first appearance at ShoWare until December 13. This is a lot like last season where Everett didn’t come to Kent until after Christmas. All home games vs Portland are Saturdays except for 1 Friday game in February. Seattle plays in Portland on Fridays 4 times, and Saturday, Wednesday and Sunday 1 each. That Sunday one is interesting as it will be the first Seattle @ Portland game on a Sunday since March 2007.

Based on the start time, Hockey Challenge looks like it will be on February 21 vs Everett.

The one stretch that might be tricky is 4 games at the end of February and start of March. It’s 4 games in 5 nights and involves a Monday-Tuesday set in Victoria.

Some other stats and how they compare to last season:

3 games in 3 nights
2014-15 5 times (AAAx1 AHHx1 HHAx1 AHAx1 AAHx1)
2013-14 7 times (AAAx2 AHHx2 HHAx1 HAHx1 HAAx1)
Cutting down on 3 games in 3 nights is good but that also means more weekday games along the way. Hard to tell which is better overall. And it looks like the WHL extended the season by a week to combat the more weekday games issue. So they found a little balance.

Looks like the TBirds traded a couple Sunday games for more Saturdays. From what at least one other GM has said, Sunday games don’t make as much as they used to. That must be the case as you don’t have to go too far back to see a Seattle schedule with 6-8 Sunday games a year.

Overall, one would have to be pretty pleased with this schedule. Ignoring the Thursday game, the TBirds beefed up the Saturday schedule a bit and provided some more variety in the Tuesday matchups. There are still a few quirks but those are going to happen when you are scheduling so many games around building availabilities and such. The potential is there for another January swoon with 9 out of 13 games during the month on the road but if the team can make it through that, they finish the season with 13 out of 22 at home.

The final game of the season is at home this year and is against Portland. There are a lot of games between now and then but that game may end up looming large when that day finally comes.