Earlier this week, the Western Hockey League released the entire 2019-20 schedule. This will be the second season of the 68-game schedule that brought the WHL in line with their Canadian Hockey League counterparts: the Ontario Hockey League and the Quebec Major Junior Hockey League. As we do every season, let’s take a closer look at what the upcoming calendar looks like for the Seattle Thunderbirds.

It wouldn’t be the start of a new season if the TBirds didn’t play in the Everett pre-season tournament. This will be the 16th straight year that Seattle has participated in the Labor Day tradition in Snohomish County. The 2019 Preseason Classic, presented by Delta Hotels, has the Thunderbirds playing three games in three days at Angel of the Winds Arena:

This will be the third straight year that the Giants and TBirds will face off on the opening day of the tournament. After not seeing each other in this tournament the last two seasons, Tri-City and Seattle will match up on the second day. Finally, on Sunday, Everett and Seattle close out the 3-day, 9-game tournament. This is the first time that the two teams will meet in game #9 of the tournament since 2011. I’ve wondered why they don’t do this more often as it ensures that the two largest fanbases in attendance stay for the whole thing.

After that weekend wraps up, the TBirds head to Kennewick for the 10th pre-season in a row to play in the Red Lion Preseason Tournament, hosted by the Tri-City Americans. Seattle will play two games at the Toyota Center:

The TBirds have not matched up against the Americans at this tournament since 2016. Surprisingly, for such heated division rivals, the Winterhawks game will be the first pre-season battle between the two teams since they met in Kennewick back in 2013.

In the last game of the preseason for Seattle, they host the Everett Silvertips at the accesso Showare Center on Tuesday, September 10th. For six of the last seven pre-seasons, the two teams have finished off the exhibition schedule with a home-and-home. This year, there is no counterpart to this game. With no apparent arena conflict in Everett, one wonders why the break with tradition. Personally, six pre-season games are enough so the seventh one won’t necessarily be missed.

One final note about the pre-season: This will be the first time since 2008 that the Spokane Chiefs do not make an appearance on the Thunderbirds schedule. They had faced each other the last 10 years in Everett and had occasional games in Kennewick, including the last two seasons. 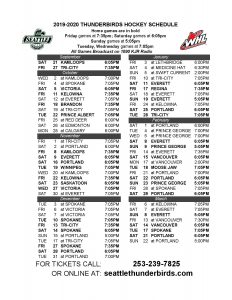 Home game #1 is also overall game #1 as Seattle opens the 2019-20 campaign at the accesso Showare Center against the Kamloops Blazers on Saturday, September 21st. This is the 3rd straight year that the TBirds open the season at home, the longest such streak since 1990-1995 when they started 6 straight seasons at home. Overall, this will be the 16th time that the season has started on home ice.

1998 was the last time the Blazers came to town for a season opener. They did make an appearance in 2005 for Seattle’s home opener but the TBirds had played 3 on the road by then. This is just the second time since 2006 that the home opener is against a non-US Division team (2015 vs Prince George).

Tri-City comes in the following weekend, on Friday, September 27th, as the Americans are the first US Division team to make an appearance in Kent this year. The Ams only make two more showings the rest of the way (December 13th and January 28th) and the two teams won’t see each other at all final two months of the season. More on this a little later.

The first road trip of the season, albeit a brief one, starts on Wednesday, October 2nd when Seattle visits Kamloops for one of two trips this year. Then it is off to Spokane on Friday, October 4th to finish off the quick roadie. The game in Kamloops is the earliest road game vs the Blazers since the TBirds opened the 2007 season there on September 22nd. The early game in Spokane is also rare and is the earliest one for Seattle in the Lilac City since 9/29/2000.

It’s an odd year to start the season which means the East Division comes to Kent this go around. Brandon gets it going on Friday, October 18th followed by Prince Albert on Tuesday, October 22nd, the recently-relocated Winnipeg Ice on Tuesday, November 19th, Saskatoon on Saturday, November 23rd, Regina on Friday, January 17th, and finally Moose Jaw on Tuesday, March 18th.

A side note here about Winnipeg. They were formerly the Kootenay Ice and moved during this offseason to become the second team in Manitoba along with Brandon. To accommodate this move from the Central to East Division, the Swift Current Broncos were shifted from the East to the Central. Because of this change, this means Seattle will make the trip to Swift Current two years in a row. The last such occurrence of this was in the 00-01 and 01-02 seasons. (Conversely, it will be 3 years between appearances in Kent for the Broncos.) Winnipeg moving from Cranbrook also affected the schedules of some US Division teams, specifically the Spokane Chiefs. With a geographical rival now departed, Spokane has added in a couple more US Division games.

The first of two voyages out to the Central Divison happens at the end of October. Seattle will play Red Deer (25th), Edmonton (26th), and Calgary (28th) before wrapping up the 5-game trip with stops the first weekend in November against Tri-City (1st) and Portland (2nd).

Everett (11/9) and Portland (11/16) make their first trips to Kent on consecutive Saturdays in November. 3 of the 5 home games vs the Silvertips this season are on Saturday while all 6 of the Winterhawks games fall on that day. Having all Portland home games on a Saturday has not happened since the 11-12 season.

The only Wednesday home game comes on November 27th when Victoria comes for their second and final visit of the season. This is the third season in a row that the TBirds have hosted a game on Thanksgiving Eve. From 01-07, it was a yearly occurrence and will be the 17th time overall they have done so.

No Black Friday game this year. It’s the first time that has occurred, home or away, since the 12-13 season. That’s great news for those University of Washington and Washington State Cougars fans as now they don’t have to decide between watching/going to the Apple Cup or attending a Thunderbirds game.

The annual Victoria trip falls on a weekend this year, as has been the alternating pattern since the Chilliwack Bruins moved to the provincial capital. That fan favorite is on Friday, December 6th and Saturday, December 7th.

The almost-annual New Years Eve game between the Winterhawks and Thunderbirds is a go for 12/31. The start time is set for 7pm. That game begins another trip which will have three more Central Division road games to start the new year. They’ll face Lethbridge (3rd), Medicine Hat (4th), and Swift Current (5th).

February 17th has the second of two Monday games on the schedule (the other is on the first Central trip). It’s in Langley vs the Vancouver Giants and has a special start time of 2pm. This is Family Day in BC and President’s Day in the US so a great opportunity with the day off for most people to make a day trip across the border and see a game.

For just the third time in team history, they will play a Leap Day game. This year, February 29th falls on a Saturday and the TBirds will take on the Winterhawks at the accesso Showare Center. It ends a month where those two rivals will have faced off 4 times in 4 weeks.

The regular season ends with a home-and-home with Portland on Saturday, March 21st in Kent and Sunday, March 22nd in Portland.

As indicated by our exclamation mark there, a rare opportunity for a weekend road trip to the Tri-Cities. It’s just the second Saturday away game in Kennewick since 2009, the other being 12/19/15.

One more interesting note here. In 17-18, Seattle played 18 games vs Spokane and Tri-City combined. That number dropped to 14 last season and stayed that way this season. That means that the four games cut out of the schedule to get down to a 68-game season came from inside the division. Seattle plays Portland almost as many times as they do the Eastern Washington teams put together. That is probably something that should be rectified but likely won’t.

Some other stats and how they compare to the last few seasons:

The HHA isn’t bad as the away game is in Portland. The AAA is just a product of the second Central trip. The HAH has the road game as a trip to Everett so about as easy travel-wise as it gets. The AHH starts in Portland which, again, not too bad. The AAH, though, starts in Kelowna and then has a stop in Everett on the way back. WIth no doubling back, this about is the best you could ask for but that isn’t a short trip up and back on the bus.