It’s the final week of the regular season and not much has been decided in the US Division ahead of the playoffs. A quick look at what the last few games hold and what they mean for the playoffs starting next week.

First, a look at the current standings: 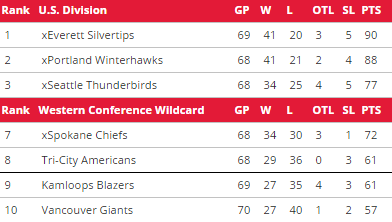 Everett, Portland, Seattle and Spokane have all clinched playoff berths already. Everett and Portland are guaranteed home ice in the first round as they will finish 1-2. The order in which they will finish will be determined by the games this week. Seattle isn’t far away from clinching the 3rd US Division spot but Spokane is still mathematically alive for it.

As far as that last wild card spot goes, Tri-City currently holds it (with their reward being a series with Kelowna in the first round) but their hold is tenuous. Fortunately for the Americans, they have games in hand on the teams behind them.

Let’s take a look at the remaining schedule for the US Division teams and those chasing a wild card spot: 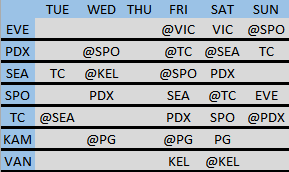 Remaining schedule as of 3/16

Everett is left with an oddly-scheduled home and home with Victoria and a regular season finale against Spokane. Even if the Silvertips win out, they still may not end up the division winner. We’ll explain that more in a second.

Portland plays 4 games in 5 nights, the first 3 of which are on the the road. They will end the season with a home game against Tri-City. If Portland wins out, they will win the US Division title.

As to why Everett could win the remainder of their games and Portland could still end up division champion, it’s because of the tiebreaker. The first tiebreaker for any playoff position, apart from the 2nd wild card, is total number of wins. If Everett wins out and Portland wins out, they will both have 96 points. But because of the number of games remaining, the Silvertips could, at best, have 44 wins while the Winterhawks would have 45. Because of that extra win, Portland would be the division champion.

Seattle also has 4 games in 5 nights and will log some decent mileage. The Thunderbirds cannot move up in the standings but they can solidify their hold on 3rd place.

Spokane, too, has 4 games in 5 nights but has the easiest schedule remaining if you are simply talking about travel. Spokane cannot be caught by Tri-City for the 1st wild card spot but can catch Seattle for 3rd in the division.

For the Thunderbirds to clinch 3rd place, it would take any combination of 3 points earned by Seattle or 3 points lost by Spokane. But because they play each other on Friday, this can be simplified further. No matter what happens between now and then, a Seattle regulation win Friday night in Spokane would clinch 3rd place for the Thunderbirds. The Chiefs will need some help this week if they want to catch Seattle but, depending on how Tuesday and Wednesday go, a win Friday night would go a long way.

(Author’s opinion: Without knowing who is going to place 1st or 2nd in the division, there’s not a lot of reason why 3rd would be better than 4th. And that’s assuming you have a preferred matchup in the first round. If you’re a hopeful optimist, though, you would want Seattle in 3rd place because that would mean home ice in a 2nd round series between them and Spokane if they both won their first round series.)

Tri-City is in the most precarious position of anyone. They play 4 games in 6 nights and on any one of those given nights, they could be in the playoffs or out of them. A single point earned in any of their remaining games eliminates Vancouver from the 2nd wild card position chase. The Americans have a game in hand on Kamloops so just need to earn one more point than the Blazers over their remaining games to clinch the wild card spot. However, in the event of a tie, a different tiebreaker comes into effect. A tie for the 2nd wild card spot would then mean a 1 game playoff between the two teams for the right to move on to play Kelowna. Any tiebreaker game between Tri-City and Kamloops would be in Kennewick.

One team that we haven’t mentioned yet is the Prince George Cougars. They are 3rd in the BC Division right now with 63 points, 2 points ahead of the Kamloops Blazers. There is a possibility where Tri-City doesn’t make the playoffs at all and one of Prince George or Kamloops taking the 3rd spot in the BC Division and the other winning the 2nd wild card spot. It’s a bit complicated to go over because Kamloops and Prince George play each other for their final 3 games of their seasons. Tri-City earning wins eliminates them having to worry about what happens in the Blazers/Cougars games.

Suffice it to say, this will be one of the most exciting final weeks that the division has seen in a while. All of the teams looking for wins and every night except Thursday features at least one game with US Division teams facing each other. Lots of intensity, lots of scoreboard watching and lots of possibilities. It may not all become clear until Sunday evening but sometimes getting there is more satisfying than the actual destination.